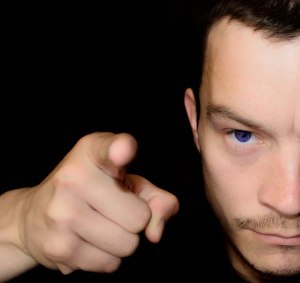 We all have them in our lives-people we don’t like. People who rub us the wrong way, who push our buttons, and sometimes more seriously, people who truly are dangerous to our mental or physical health. What should we do?

Annette cringed running into Mrs. B in the grocery store, which happened nearly every week. The older woman always pried into Annette’s business and asked questions that made her feel uncomfortable. “ Oh my, you’re pregnant AGAIN?” Mrs. B would say with a feigned gasp, as though she didn’t expect it from the faithfully Catholic mother of five little ones already. “Yes, Mrs. B., we talked about that last week, “ Annette would reply, “Tom and I are thrilled. Remember?” Then Mrs. B would talk on and on about her own grown children, sprinkling sentences with “in my day” and “I never”. With an earful of talk about the old days of impeccably ironed bed sheets, children that were seen and not heard, perfect home-cooked meals, and how “this generation” doesn’t do it right, Annette felt her shoulders droop. She excused herself because the ice cream in her cart was dripping. And, frankly, so was her spirit.

Mark couldn’t stand the new guy at work. He was younger than Mark and less qualified for his position but the new guy bragged on an on about his accomplishments and liked to tell everyone how it is and what to do. Mark found himself closing himself off in his own office whenever the new guy came around. Secretly, he stewed and felt resentment rising against him.

What’s the Christ-like response to these kinds of difficult people?

St. Therese wanted to obey Jesus’ commandment to love one’s enemies. She shared that in Carmel, there are no enemies, but there were some annoying people to her. Think of that- People can even annoy saints! There were some nuns whom St. Therese did not like but Therese set about going out of her way to treat them lovingly just as Christ would. This should be our response to the difficult people in our lives-simply to treat those people with love, regardless of our feelings.

“But the Our Father prays ‘lead us not into temptation’ and this person is a huge temptation for me!” you may say. And indeed that very well may be true. God doesn’t ask us to seek out difficult people just treat them with kindness and patience when we do come in contact with them.

Do you have difficulty forgiving an offense? Picture the difficult person as a baby, untainted, needy, innocent. Now imagine some injustice being perpetrated on the child, because likely that is what has happened that has made him difficult. Perhaps he was ignored, neglected, abused or ridiculed by someone who was supposed to love him. You’ve heard the old adage “Hurt (adjective) people hurt (verb) people”? Well, there is much truth to that.  Before this difficult person hurt you, he was likely hurt by someone else. This does not excuse his sin, of course, but if you view the person as God created him, an innocent soul before he was swayed by sin, it is easier to forgive.

Once we have forgiven should we forget? Yes, and no. Yes, we should not dwell upon the offenses against us. We should pray for and wish the best for even those who do evil to us. However, we should not feel compelled to put ourselves in a situation where we ‘forget’ the offense occurred and thus can seriously be hurt again. If someone has mentally or physically abused or hurt our children, our spouse or us, for example, it is not only okay to avoid that person but it is imperative that we do so. In some circumstances we absolutely must maintain the smart reaction of keeping a safe distance. Recognizing this nuance is important.

What about forgiving when the perpetrator is not penitent? Kindness should be offered, but again, no risks taken.

When thinking about dealing with difficult people, it helps to categorize them into two groups- those who are harmless and those who are dangerous. Dangerous people should clearly be avoided, but what about harmless ones? They can be some of the most annoying.

Harmless, difficult people are like Mrs. B in the example above. She probably does not mean to come off as judgmental or critical. She likely is lonely and wants to offer her ideas to feel that she (or her opinion) is valued She might be pining for her younger years.

Handling harmless, annoying people like Mrs. B is not hard. When contact is unavoidable, approach them rather than wait to be approached. Ask their opinion before they offer it. Validate them with a sincere compliment. Be firm in your boundaries and don’t feel badly about leaving when you need to do so. Don’t dwell on what annoys you about them. Brush off the annoyance by chalking it up to the differences in personalities that God has created and leave judgment of them to Him. Decide not to do to others what’s been done to you and you don’t like. Realize that you probably come off as annoying to others at some point too.

What about the know-it-all, younger co-worker? He is also probably harmless. The same strategy applies with him. Work is a competitive situation, and total avoidance generally doesn’t work in the office. The best way to handle the know-it-alls at work is to keep things professional. Pour your energy into your work and outshine him in that way. On a personal level be friendly and sincerely warm. Be Christ-like and kind. You don’t have to socialize beyond your working hours. View the challenge as a motivating factor to perform better.  And retreating to your cubicle when you just can’t take his pontificating any more is much more desirable than making a snarky remark, so yes, you still do have that option.

What if the difficult person is family, a harshly critical in-law or sibling?

Similar strategies can be applied: Listen, smile, be kind, and excuse.

Listen to what the person is saying, not just the words but also his tone and the body language. Is he frustrated? Does he simply want validation of his own skills or value?  Sometimes just listening softens people.  It also helps you develop patience.

Be kind. Be kind because you are a Catholic Christian and the difficult person standing in front of you is also one of God’s Divine creations. Jesus also died for the salvation of this difficult person and out of respect for that, you must be kind. Being kind helps you develop feeling kind. Think about it.

After listening, smiling, being kind and mentally excusing the behavior of a difficult person, sometimes you just have to turn away. God does not ask us to be human punching bags or ‘take’ mean or frustrating behavior. You value yourself and that’s good. You have dignity and we all have our boiling points. Sometimes you simply must utter a quick prayer and walk away from difficult people, and if done while truly trying to do God’s will and exude God’s love, there is nothing wrong with that.

But to you who hear I say, love your enemies, do good to those who hate you,bless those who curse you, pray for those who mistreat you

Click here to read my Everyday Catholic column , where I write about love, life and other important things-

Click here to read my articles on Catholic Exchange

Click here to read my articles on Catholic Lane

Ellen Gable, Patti Maguire Armstrong and me at the Catholic Writer's Guild Table